The Mount Esja trail is probably the best known and most visited hiking trail in Iceland. The trail leads to a volcanic mountain range called Esjan which is often referred to as Mount Esja. Mount Esja is easy to reach from Reykjavik (and thus on our list of the 5 Best Hiking Trails in Iceland Reachable by Public Transport) and offers an astonishing view on the capital and beyond. As you might know I was for quite some time stuck climbing insignificant mountains in Iceland because all the higher ones were still covered with snow (see all my adventures in Iceland here). If I would have brought my crampons and ice axe, this wouldn’t be a problem. However, July brought some nice weather and the snow more or less melted below the altitude of around 1000 meters. Therefore, Mount Esja was back in the game.

This trail is technically demanding and requires experience with alpine mountaineering and good footwear.

Mount Esja’s starting point can be easily and quickly reached from Reykjavik by public transport. First take bus number 5 from Hlemmur main station towards Artun. If you are not planning to leave from the Hlemmur main bus station, check Straeto’s website to find other buses that drive to the Artun bus stop. The bus drive will take around 10 minutes. At Artun bus stop take bus number 57 towards Akureyri but get off the bus after approximately 20 minutes of driving at the bus stop called Esja Hiking Center. Ask the driver to drop you of at Mt. Esja if you are new here. There you will see a big parking lot and a restaurant. The above attached GPS route starts here. You can also reach the starting point by car since the parking lot is very big and free to use.

The path is very clearly marked, and in nice weather you shouldn’t have any problems with the navigation. However, keep in mind that the weather can change very quickly in Iceland and that even a simple hike like this can become very difficult in bad weather. Also check snow conditions before going, because if the mountain is covered with snow you will most likely need crampons and ice axe.

From the starting point, go past the restaurant and follow the narrow path which runs uphill. After 1.5 kilometer the path splits into two. Both paths are leading towards the top of the mountain range. The left (western) path, which I took for the way up, is steeper and requires better footwear. After approximately 2.8 kilometers you will reach the point called Steinn which means rock in Icelandic. The sign Steinn is placed on the rock, so it is hard to miss it. This is also the point where most hikers turn around in case of bad weather or inappropriate equipment.

Above the Steinn, the path becomes steeper and more dangerous. There are steel cables at some exposed places which you can use for additional security. After approximately 400 meters of a quite steep climb, you will reach the top of the mountain range which is called Tverfellshorn.

Please note that Tverfellshorn is not the highest peak of the mountain range. The highest peak called Habunga is 914 meters high and lies approximately three kilometers from Tverfellshorn where I turned around (check the GPS route). The path towards the Habunga, didn’t seem to be difficult but I was running out of time because I had to catch the bus, so I decided not to continue.

For the way back to the Steinn I used the same path as for the climb. At Steinn I decided to use the less steep eastern path for the way down. The path is very nice and appropriate for everybody. After approximately 2.6 kilometers from the Steinn, the path connects with the path which I used for the way up. Then I just continued back to the bus station, where I barely caught the bus towards Reykjavik.

Make sure to check the bus 57 timetable because it doesn’t go so often. On this hike the weather surprised me positively for once – it was way warmer than I expected. I was wearing a t-shirt made of polyester, Woolx Blizzard Top, windproof Schoeller AB400 pants and Salewa Mountain Trainer Mid hiking boots. On the top of the mountain range the wind got stronger, so I had to put my Woolx hat on. The windproof pants were actually too warm for this hike and I really wished that I would have used less insulated pants. In the Osprey backpack I was carrying some additional clothing, water and food. Regarding equipment I advise you to use equipment appropriate for the season. For example, in winter, late autumn and spring you will most likely need crampons and an ice axe. The Salewa Mountain Trainer Mid hiking boots were perfect for this hike, where the terrain was mainly rocky. The boot is equipped with a relatively stiff sole and therefore offers great performance on exactly this type of terrain. I was also more than satisfied with the provided grip while climbing the trail. Additionally the Salewa Mountain Trainer boots were very comfortable and didn’t cause any pain or discomfort. I would recommend these boots to every hiker who wants a pair of reliable and comfortable boots for technically complex trails. You can read the full reviews of the Salewa boots here.

Note: Salewa has since released an updated version of this boot and the links are for the new version. 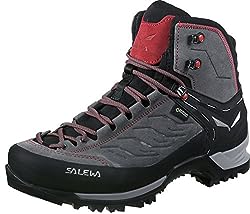 The Mount Esja trail is one of the best trails in proximity to Reykjavik. It is appropriate for everybody, but I would advise those who are not well prepared to turn around at the Steinn because from there on the path gets steeper and technically more difficult. The top Tverfellshorn provides an astonishing view on Reykjavik and the Atlantic Ocean. Regardless of season I recommend wearing a pair of good hiking boots and bringing a windproof and rain-resistant jacket. Iceland is indeed a very windy and rainy country where the weather changes rapidly. How to clean and maintain a hydration bladder? yes there are some steep and exposed areas from the Steinn point onwards. Nevertheless, I have seen several kids on the trail. If you don’t have experience with steep trails or mountaineering, I recommend going only to Steinn. You get a nice view also from there 🙂

Was there a fee to hike?

Shylee, there is no fee to hike and the parking lot is also free of charge – or at least it was a couple of years ago 🙂

May I know if “Mount Esja” is suitable for trekking in Mid April?

I’m quite sure the trail will still be covered with snow and ice in April. So, only if you have experience with winter mountaineering and know how to use ice axes, crampons and other relevant gear.

Would you say Stein is suitable for walking up In February?

this depends on the conditions, but I would say no unless you have proper equipment (crampons, ice axes etc.) and experience with winter hiking. I did once hike towards Mount Esja in February but the conditions were challenging. You can read more about this adventure in our blog post Six biggest hiking mistakes we’ve made (so far) 🙂 See the last section.

We plan to do the hike in October 2021 (13th October 2021 to be precise). We are not superbly trained for hikes but we won’t consider ourselves amateurs either. Can you suggest if we need to take any additional precautions and how long we would take approximately? We aim at going till the top.

It really depends on the conditions on the trail. I recommend checking if the trail is covered with snow/ice before doing the hike (ask on Reddit or locals when you’re there). If there is snow you’ll need crampons, ice axes and above all experience with winter mountaineering. In good conditions proper hiking footwear and clothing should be enough. I think you’ll need from 2 to 3 hours to complete the hike but of course It depends on how fit you are.

I wish you a nice and safe hike!