On the third day of our hiking-intensive holidays in Arabba in the Dolomites, I climbed the highest mountain in the area, the 3152 meters high Piz Boe. Climbing Piz Boe was not a spontaneous decision. I had planned to climb this mountain way before we arrived to Arabba. Why? Well, it’s the highest peak in the area and as a fan of thin air I naturally didn’t want to skip it. Furthermore, there is a mountain hut at the top and there are few things better than enjoying a cup of good coffee at such an altitude, while observing the beautiful peaks of the Dolomites. Ironically, it turned out that the coffee up there actually wasn’t that good, but the Piz Boe trail was, nevertheless, my favorite hike during the holidays.

Piz Boe is a popular destination, not least because you can take the cable car from Passo Pordoi (reachable by car) to the Sass Pordoi peak which lies at an altitude of 2950 meters, close to Piz Boe. In case you take the cable car, the trip to the top is a relatively short alpine ascent. I decided to do this hike properly and thus hiked the whole way up from Passo Pardoi. The trail goes past the Rifugio Forcella Pordoi mountain hut and from there, you can choose between two routes to the top. Both are technically difficult but only one is a proper via ferrata trail. The via ferrata trail approaches the mountain from the southern side while the other route approaches the mountain from north-west. I had planned to take the via ferrata up, but I forgot my gloves and because it was very windy and quite chilly, taking the via ferrata was not a viable option. Instead, I took the easier route up. Below is the description of the trail.

The Piz Boe trail starts at Passo Pordoi (coordinates 46.488969, 11.811467) which you can easily reach by car. The pass lies at an altitude of 2239 meters (7346 ft.) which means that you can climb Piz Boe from there relatively fast. The road to the pass is good (i.e. asphalted) and there are several parking lots at the pass. I parked my car on the parking lot closest to cable car station which is free of charge. Nevertheless, there is a sign at this parking lot that says: “only for cable car customers”. However, it seemed to me that there is no system in place to verify whether you are a cable car customer or not. I didn’t feel guilty for parking there because there were many free spaces.

When you reach the Pordoi pass, find the cable car station on the northern side of the main road. The trail starts on the right side of the cable car station and there is a direction sign for Piz Boe at the beginning of the trail. The trail is in general well-marked with direction signs and thus navigation shouldn’t be a problem. Nevertheless, you can download my GPS track for free above and use it with your smartphone or GPS device.

The first part of the trail (up until Rifugio Forcella Pordoi) is the same as the trail to 2950 meters high Sass Pordoi which I climbed on the first day of our holidays. This stretch leads you from Passo Pordoi towards north and soon becomes rocky and steep. Eventually it brings you on a slippery scree beneath the southern wall of Sass Pordoi where good hiking footwear is essential for safe passage. There the trail ascends rapidly towards the Rifugio Forcella Pordoi mountain hut. Just beneath the mountain hut there was still some snow at my visit in July, but the authorities have attached a rope, so hikers can safely ascend/descend this relatively steep stretch. It’s 2.6 kilometers from Passo Pordoi to Rifugio Forcella Pordoi while the total ascent is about 600 meters. You can reach the mountain hut in about an hour, depending on your physical preparedness.

At the mountain hut you should take the wide path that goes towards east. This path runs over a relatively flat terrain and eventually turns towards north. In July there were still some snowy patches up there. However, the snow was melting and wasn’t deep. Therefore, crampons and ice axes weren’t required.  The Piz Boe peak is clearly seen from here and sooner or later you will notice mountaineers doing the via ferrata trail on the southern side of the peak. After hiking for around 3.7 kilometers altogether you will come to a road fork with various direction signs. Here you should follow the direction sign for Rifugio Boe, if you are planning to stick to my trail. In case you want to take the via ferrata up, you should follow the direction sign for Piz Boe.

The path now leads you towards Rifugio Boe. Note that Rifugio Boe – despite the name – isn’t located on top of Piz Boe, but beneath the peak in the direction of north-west. The mountain hut on the top is called Rifugio Capanna Piz Fassa.  After hiking for approximately 5 kilometers altogether you will come to another road fork. The left path goes to Rifugio Boe while the right path ascends rapidly towards the peak.

Here you should take the path towards the peak. The path is technically difficult and on several stretches you will find (and use!) a steel cable for extra support. At some point the path splits into two. Both paths lead to the top but one is intended for the way up and the other one is intended for the way down. I guess that’s because the trail can get very crowded in the summer. Nevertheless, I misunderstood the sign and I took the “only down” path for the way up as well. Luckily the trail was not that crowded. There was still some ice and snow on this stretch in mid-July and thus extra caution was required. Nevertheless, after ascending for around half of an hour I reached the top.

The Rifugio Capanna Piz Fassa at the top provides warm drinks and food. However, do remember that they accept cash only. There are benches and tables in the front of the mountain and the view is just amazing. From the top you can see numerous peaks of the Dolomites, including the astonishing Marmolada massif in the direction of south. After I had my coffee, I returned to Passo Pordoi. I used the same path, but I did make some shortcuts where it was possible. Piz Boe Trail – The only down path July in the Dolomites wasn’t as warm as I expected. On this hike I was wearing the Falke Cool T-Shirt, Falke Cool Boxers, Mountain Hardwear Monkey Man fleece jacket, Montane Terra Pack pants, Salewa Mountain Trainer Mid hiking boots and a hat. When I reached the Rifugio Forcella Pordoi mountain hut, I also had to put on my Montane Minimus jacket because it got super windy up there. In my Osprey Talon 22 daypack I was carrying 3 liters of water and some snacks. I also used the lightweight Montem 3K Carbon trekking poles. I wish I had taken my gloves with me because my hands were really freezing throughout the hike. I wore these Falke socks on all hikes in the Dolomites and I was very satisfied with them. The socks are made of a super soft material which feels incredibly nice against the skin. They are also breathable, moisture-wicking and quick-drying. When I put them on for the first time, I was really surprised how comfortable they are. So, if you are looking for a pair of good hiking socks, look no further than the Falke TK2 Wool Silk socks. A detailed review of the socks is available here. I really like the Montem 3K Carbon Trekking Poles because they are lightweight (carbon fiber), easy to adjust and small when shortened. I used them on many hikes this summer and the only thing that bothered me is that the baskets broke very fast. Nevertheless, the baskets are not the most expensive or crucial part of the poles, and they can be replaced easily. When I was climbing the last stretch to Piz Boe, I attached the trekking poles to my Osprey Talon 22 daypack via Stow-On-The-Go system which worked perfectly. Read the full Montem 3K Carbon Trekking Poles review here. 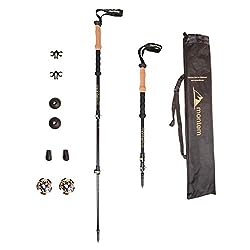 The Piz Boe trails is best for those who already have some experience with hiking and mountaineering. Some stretches are technically difficult and thus good hiking footwear is essential. I also recommend bringing a climbing helmet for the very last stretch because it’s quite steep and rocky. Note that if the trail is covered with snow, a completely different set of equipment is required (crampons, ice axes etc.). Before going on this alpine ascent also check the weather forecast and postpone the hike in case of bad weather coming up.

Piz Boe Trail – The terrace on the top

Piz Boe Trail – Snow on the way back