In April 2017 we were travelling around France and on our way we also stopped in Grenoble. Grenoble is a quite big city in southeastern France which lies at the foot of the French Alps. Being so close to the Alps, we of course wanted to go hiking there. After a brief research we decided to climb the 1901 meters high Le Moucherotte peak which is located slightly west of the city. We also considered other peaks like the 2082 meters high Chamechaude and 2062 meters high Dent de Crolles. However, Chamechaude and Dent de Crolles were not good options for us because the starting points of the trails leading to the peaks can’t be reached by public transport and we didn’t have a car at our disposal. As we didn’t bring winter equipment such as crampons, gaiters etc. we also didn’t want to climb a peak that was covered with snow – which was the case at many of the 2000+ meters peaks around Grenoble in April. At Le Moucherotte there were only occasional patches of snow close to the top. The starting point of the trail is in the village of Saint Nizier du Moucherotte, which can be reached by bus, and the whole trail is about 10 kilometers long.

The trail to Le Moucherotte is not technically challenging but it does require some physical preparedness as it over the distance of 9.26 kilometers ascends/descends for almost 800 meters. In winter you might need additional equipment such as crampons, ice axe and gaiters in order to execute this hike safely.

The trail to Le Moucherotte starts in Saint Nizier du Moucherotte which is a small village located approximately 18 kilometers west of Grenoble. The village lies 1150 meters above the sea level in the picturesque Vercors mountain range.

Saint Nizier du Moucherotte can easily be reached by public transport from Grenoble. You should take the Transisere bus 5110 from Grenoble main bus/train station (Gare Routiere Grenoble) which goes towards Villard de Lans. After driving for approximately 40 minutes you should go off the bus at the bus stop called Le Village – Saint Nizier du Moucherotte, which is in the center of the village. At the bus stop you will see a combined tourist office/postal office and a bit further away, a public toilet. The above attached GPX route starts exactly at the bus stop. Bus tickets can be bought at Grenoble main bus station (ticket machines) or on the buses. For this journey you will need a 3-zone (A+B+C) ticket which costs approximately 6 € ($ 6.5). As bus 5110 doesn’t drive very frequently (only a few times per day), don’t forget to check the timetable on the Transisere website.

Alternatively, if you are coming by car from the north or south, you should drive along the A480 expressway until you reach the Seyssins exit. Get off the expressway there and continue on the D6, over the bridge, towards west until you reach the roundabout. In the roundabout, turn left (in the direction of south) towards S’ Nizier. After driving for approximately 2 kilometers you will reach another roundabout where you should go right. Then drive for couple hundred meters to a crossroad and turn left there. From there on just continue on the windy D106 until you reach the village. You can park your car close to the bus stop for free.

The trail to Le Moucherotte is well-marked with directions signs as well as painted white and red stripes on rocks and trees.  Therefore, navigation is not very difficult.  From the bus stop, start walking on the asphalt road towards north-east (Chemin du Belvedere street) and soon you will reach a small church. Continue on the Chemin du Belvedere street for a couple hundred meters more until you reach an observation point (the Belvedere) – a small terrace where you can get a great view on Grenoble and numerous peaks in the amazing Ecrins mountain range. Some of the peaks in the Ecrins mountain range are higher than 4000 meters.

After hiking on this path for couple hundred meters, you will reach a small stream with crystal clear running water. Here you can refill your water bottles or hydration bladder which comes in handy in the heat of summer. Stay on this narrow path which will eventually change direction towards northeast and start ascending rapidly to a poorly maintained mountain shelter. From the mountain shelter, continue towards the radio tower (visible from that point) in the direction of east. The peak is located just a few meters from the radio tower (direction south).

On the top you will be rewarded with a great view on the city of Grenoble and the numerous peaks surrounding it. In clear weather you will also see the higher mountains in the Ecrins and Vanoise mountain ranges from there.

As we were conducting the hike on a Saturday with quite nice weather we met several small groups of hikers, but never so many that we felt that the trail was overcrowded.

As we were in a hurry to catch the bus back to Grenoble, we used the same path for the way back as for the climb. Moucherotte Trail – Path in the beginning As the temperatures were relatively high and the hike wasn’t very long, I didn’t bring too many things with me. During the hike I was wearing the Wooly Merino t-shirt, Mountain Hardwear Monkeyman fleece jacket, Montane Terra Pack pants, Salewa Mountain Trainer Mid hiking boots, Woolx Merino Boxers, Woolx Merino hat and socks made of Coolmax fibers. In my Osprey Talon backpack I was carrying my Montane Minimus rain jacket (review coming soon), gloves, food, 2 liters of water and some accessories. On this hike I was wearing the Wooly Merino T-shirt as a base layer and I was very satisfied with its performance. The t-shirt offers great moisture-wicking properties while the material is very comfortable to the touch (not itchy). As the fabric is very thin (150 g/m2)the t-shirt also dries fast and is incredibly breathable. Like with other base layers made of 100% Merino wool, I couldn’t detect any signs of odor after the hike. 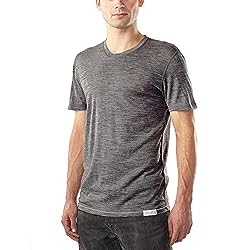 Le Moucherotte is not a technically challenging trail and thus can be done by everybody who is in a decent shape – even by families with kids. As the starting point can be easily reached with public transport, we especially recommend this trail to those who are visiting Grenoble and don’t have a car at their disposal. Don’t forget to have enough water with you in summer as the temperatures can get very high in this area. In winter the trail might be covered with frozen snow/ice and thus require additional equipment such as crampons. We also recommend that you check the weather forecast before going – if there is a chance of thunderstorms we advise you to postpone the hike.

6 thoughts on “Moucherotte Trail near Grenoble – Hiking the Alps”