In the beginning of January 2017 Garmin announced two new products; the Fenix 5 GPS watches and the Garmin inReach handheld satellite communication and navigation devices. While the Garmin Fenix series watches have been on the market since 2012, the inReach devices are the first satellite messengers (devices designed for communication where GSM signal is not available) from Garmin. However, Garmin’s entry into the market of satellite messengers already started in the beginning of 2016 when it acquired DeLorme – a successful manufacturer of satellite messengers and personal locator beacons. The Garmin inReach devices are basically redesigned and updated versions of the Delorme inReach devices which have been on the market since late 2011. Garmin’s competence within GPS navigation and Delorme’s competence within satellite communication indeed make this an advantageous partnership.

The Garmin inReach collection consists of two devices; the inReach Explorer+ and the inReach SE+.  Both devices support satellite communication – you can send an emergency distress signal, share your location and receive/send SMS messages even when GSM signal is not available (note that a subscription is required for satellite communication to work). Additionally these two devices can also be used for navigation. Both devices can show the coordinates of your current location and allow you to insert waypoints and routes (breadcrumb trails to follow). However, the two devices differ greatly when it comes to navigation; only the Garmin Explorer+ supports maps and has a digital compass and barometric altimeter. The Garmin SE+, on the other hand, offers similar navigation features to GPS watches (excluding the new Garmin Fenix 5X) which show your location in relation to the route/waypoint – but not on a map with terrain details. However, GPS watches typically do have both compass and barometric altimeter which come in handy for navigation.

Please note that both inReach devices are primarily intended for those who often hike in areas where GSM signal is not available – if you are not one of those, you will probably be better off with a standard handheld GPS device.

The product is suitable for:

What is on the outside? The Garmin inReach devices are identical on the outside and have a design very similar to Garmin’s GPSMAP handheld navigation devices; the buttons are placed below the 2.3-inch screen which increases the length of the device. Nevertheless, each inReach device is very compact and fits well in the hand. The case is very rugged and has an IPX7 water rating which means that it can withstand incidental exposure to water (maximum depth of 1 meter) for up to 30 minutes. A clip on the back side of the case allows you to attach the device to a belt or other equipment. The SOS button, which sends an emergency signal to GEOS, is on the right side of the device. It is covered with a plastic flap which has to be removed for you to actually press the button. This detail prevents you from accidentally triggering an emergency signal. The micro USB port for recharging is placed at the bottom of the case and covered with a flap.

Both inReach devices are equipped with powerful rechargeable lithium-ion batteries. Garmin states that the battery life is up to 100 hours at 10-minute tracking mode (default setting) which is indeed impressive. However, unlike many handheld GPS devices, inReach devices only work with the supplied lithium-ion batteries. For example the Garmin Montana 680t handheld GPS device comes with a rechargeable lithium-ion battery but you can also use three AA batteries instead. This comes in handy if you empty the battery in the great outdoors and don’t have access to the electricity since disposable batteries are lighter than a power bank or solar charger. Nevertheless, Garmin inReach has a much longer battery life (100 hours) than handheld GPS devices (usually around 20 hours). The Garmin inReach devices support Iridium for satellite communication. The Iridium satellite network consists of 66 satellites and offers global coverage. However, keep in mind that any obstacles (terrain, trees etc.) between the device and the satellites can impair the reception; even with global coverage it is possible that you won’t get the signal in narrow valleys or canyons, dense woods etc. However, there should be no problem getting the signal in open terrain (clear view of the sky) despite your location.

The Garmin inReach allows you to send and receive SMS messages, trigger emergency response and share you location via satellite communication.

Text messages on satellite devices function similarly to GSM text messages except that they are sent and received via satellite communication. You can type messages directly on the device (4-way button) or pre-insert them via inReach online portal. The device also allows you to save contacts for quicker and easier conveyance.

With Garmin inReach you can also easily share your location and route through the MapShare portal. Family and friends can follow your progress on their computers by using the MapShare web app. You can also embed your MapShare page (which shows your location) to your blog or social media accounts (Facebook and Twitter).

However, note that a subscription is required for inReach devices to work. Garmin offers four different plans; safety, recreation, expedition and extreme. The least expensive plan costs approximately 12 USD per month while the most expensive plan costs approximately 100 USD per month (at the time of posting). Freedom plans (e.g. plans that do not require yearly subscription) are more expensive. The pricelist is available here. Consider your needs thoroughly before signing up. Both devices show coordinates of your current location and allow you to insert routes and waypoints via the inReach web app. In the navigation mode the device shows your current location in relation to the waypoint or route (breadcrumb trail to follow). On the inReach Explorer+ device waypoints and routes are shown as an overlay on a topographic map while the inReach SE+ does not support maps. This is indeed a limitation when it comes to navigation through unknown terrain – imagine for example searching for a bridge to cross a river on the way to your destination when the device only shows your location, your direction and the destination without the terrain details. Nevertheless, both devices track your progress (draw a line where you hike) so that you can easily find the way back to your starting point when needed.

Both inReach devices are equipped with a Bluetooth adapter for connecting the device to a smartphone (Earthmate app is required). When connected, you can sync contacts from your phone with the device. Furthermore, you can also use your smartphone for navigation; the Earthmate app provides access to unlimited maps and aerial imagery. However, using a smartphone extensively for navigation might not be the best option as smartphones typically have a very limited battery life. Like the barometric altimeter, a digital compass comes in handy for navigation in case that the GPS signal is not available. The device does not have to be completely leveled for precise measurements as the compass automatically handles tilting (3-axis).

The Garmin inReach devices are primarily satellite messengers and thus best for those who often hike/travel in areas where GSM signal is not available. However, both devices can also be used for navigation. Unsurprisingly, the Garmin inReach Explorer+ offers much better functionality (by virtue of its maps) when it comes to navigation than the inReach SE+. As the Explorer+ is not much more expensive than the SE+ I believe that most hikers will decide for the Explorer+ when choosing between the two of them. All in all, the Garmin inReach is probably one of the best satellite messengers currently available.

In my opinion, however, many hikers would prefer to see satellite communication integrated into existing Garmin handheld GPS devices which (unlike inReach devices) come with Garmin maps and better connectivity. For example Garmin GPSMAP 64 (which is highly popular among hikers) allows you to connect a heart rate chest strap, VIRB action camera, TEMPE external thermometer etc. to the device. 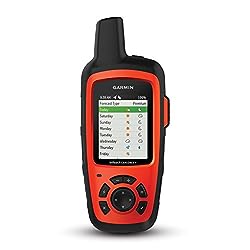 The Best Compasses for Hiking in 2022 What are GPS tracks and how to use them for hiking?