For many, Casio might stand as the quintessential manufacturer of high quality sports watches, but regrettably the brand has fallen behind the competition (namely Suunto and Garmin) in the area of outdoor watches. Until 2012 Casio Pro Trek watches offered features and functionality comparable to Suunto’s outdoor watches such as Suunto Core (first released in 2007 but redesigned since then) and Suunto Vector (discontinued in 2015). These watches were equipped with altimeter, barometer and digital compass and were often referred to as ABC watches.

However, in 2012 the first proper GPS watches aimed towards hikers, trekkers and mountaineers were introduced; Suunto released the Ambit series watches and Garmin its Fenix series watches. In addition to ABC (altimeter, barometer and compass), these watches feature built-in GPS for tracking and navigation which is indeed very useful for outdoor activities such as hiking and trekking. However, Casio decided not to follow the competition and thus didn’t develop any watches with built-in GPS and support for tracking and navigation. Now, 5 years after the first outdoor GPS watches were released, Casio has finally announced the release of a new Pro Trek Smart series watches with built-in GPS.

Unlike Suunto and Garmin watches which use custom-made operating systems, the Casio Pro Trek watches will use Android Wear 2.0. The new Casio Pro Trek watches will thus allow you to use Android Wear apps on the watch. Every Pro Trek Smart watch will come with several apps developed by Casio. These apps will make the watch suitable for outdoor activities such as hiking and trekking (for example app for navigation, activity tracking etc.). According to Casio, the new Pro Trek Smart watch will, via one of the Casio apps, even be able to show a topographic map on its colorful 1.3-inch display. Such a feature would indeed be very useful as it allows you to see the terrain that awaits you and thus choose the optimal route to your destination, avoiding large bodies of water and other obstacles. However, Casio is not the first to introduce topographic mapping in outdoor watches – the recently announced Garmin Fenix 5X watch will also support maps and is expected to be released in March 2017.

Note:  Several smartwatches released before Casio and Garmin Fenix 5X have the capability to show maps on the display but none of them features built-in GPS or an adequately robust design for outdoor activities such as hiking, trekking, climbing etc.

The product is suitable for:

The Casio Pro Trek Smart collection consists of two watches; WSD-F20-RG and WSD-F20-BK. The watches differ only by the color of the case – the WSD-F20-RG has an orange case while the WSD-F20-BK has a black case. Both watches come with an AC adaptor and a special charging cable. They are both expected to be released on the 21st of April 2017.

What is on the outside? Casio has not yet provided the information about the materials of the watch. However, it seems like the watch is equipped with a silicone band and has a case made of composite materials. The bezel seems to be made of plastic, unlike at the high end Suunto and Garmin watches which typically have stainless steel bezels. Nevertheless, Casio states that the watch meets MIL-STD-810 standard (United States military standard for durability) and thus it is to be expected that the watch will provide good sturdiness. It is not yet clear if the watch will come with a mineral crystal or Sapphire lens. It would be a great advantage if the watch comes with a Sapphire lens for those who often do technically challenging hikes as mineral crystal lenses get scratched very fast on cliffs and rocks and nobody wants to wear an expensive watch with a severely scratched display.

The watch is also quite bulky – its dimensions are 61.7 × 56.4 × 15.3 mm which means that it is bigger than the Garmin Fenix 5X (the biggest watch from Garmin’s Fenix 5 series) with the dimensions of 51 x 51 x 17.5 mm. Therefore, those with narrow wrists (especially women) might have problems wearing it.

The 1.3-inch dual-layer display (touchscreen) combines monochrome and color LCD. In time mode the watch uses the monochrome LCD for reduced battery consumption while in other modes it uses the color LCD with a resolution of 320 x 300 pixels. How useful a touchscreen is on an outdoor watch is discussable, but keep in mind that you might have problems using it with gloves on.

The Casio Pro Trek Smart watch also has three buttons on the right side; a tool button, power button and app button. The buttons allow you to navigate through menus and can be assigned specific functions. The watch also features a water-resistant microphone which’s functionality depends on the apps and Android Wear features.

The features of the Casio Pro Trek Smart watch include barometer, barometric altimeter, digital compass and built-in GPS capabilities. The functionality of this hardware is highly dependent on the Android Wear apps. In addition to the GPS, Casio Pro Trek Smart watches also support Russian Glonass and Japanese Michibiki. Therefore, the watch has plenty of satellites at its disposition and is thus more likely to get a satellite fix in narrow valleys, dense woods etc. The Casio Pro Trek Smart watches are the first watches to support the Japanese Michibiki positioning system. The Activity app supports several sport modes such as trekking, cycling, paddling, fishing and skiing. The app shows a topographic map and your location on it. The maps also work without internet access but they do have to be downloaded in advance. The app uses Mapbox’s maps which are also used by Suunto’s Movescount app.  Additionally, the app can also show other GPS-based data such as your current speed, elevation etc.

The Moment Setter app triggers a notification when pre-set conditions are met – for example you can set the app to trigger the notification when you have walked the distance of 10 kilometers. This app could actually come in very handy for hiking, trekking etc. However, it all depends on the final version of it and it is not yet clear which kinds of conditions will you be able to set (altitude, coordinates etc.). The Moment Link app shows your friends’ current locations on the map (if they also use the Moment Link app) and allows you to send them messages (you can use the watch’s microphone to compose the message). However, this app requires that you have internet access (through your smartphone) and GPS signal. It also doesn’t work with iOS devices.

The Casio Pro Trek Smart watch will be priced similarly to Garmin Fenix 5 and Suunto Spartan, but the question is if it can really compete against these two watches as both Suunto and Garmin have much more experience with producing outdoor GPS watches than Casio.

My main concerns regarding the hiking/mountaineering functionality of the new Casio Pro Trek watch are:

Nevertheless, it is completely possible that the Casio Pro Trek Smart watch will surprise us with its functionality when released. To see against which watches the Pro Trek Smart competes against, check our review of the Best Watches for Hiking. 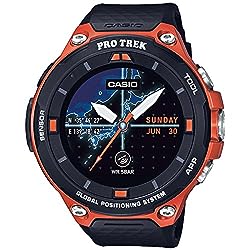